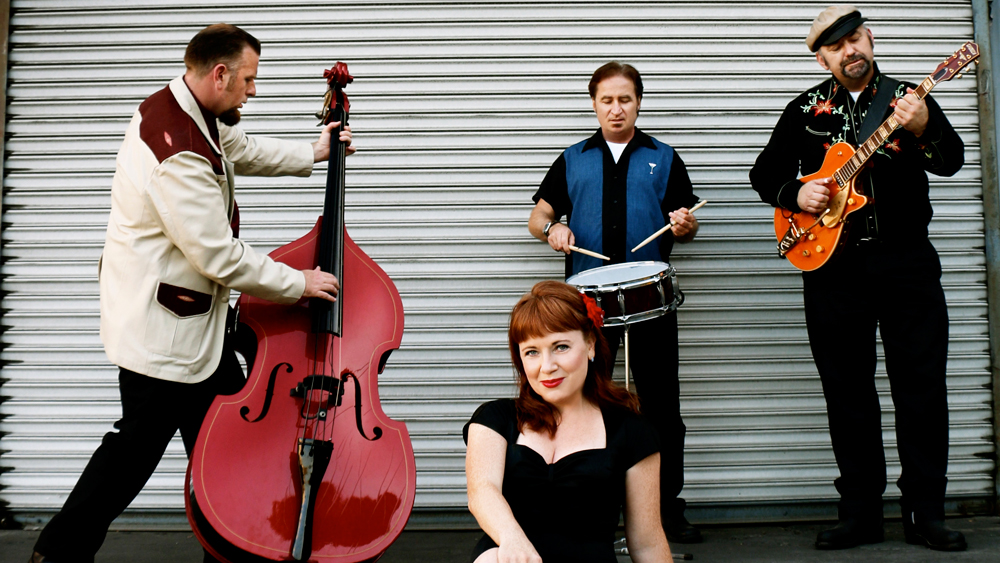 Perhaps best known for her title role in the 1982 film Annie, two-time Golden Globe-nominated Aileen Quinn is on a mission to carry 1940s and 1950s rockabilly into the 21st century with her honey crisp voice, raucous vintage rock ‘n’ roll sound and the support of her lively band the Leapin’ Lizards. With a swingin’ upright bass, bright guitar riffs and lively percussion under Quinn’s ever smooth and potent voice, the band treats audiences to covers of time-honored classics and original rockabilly tunes with a fun, fresh perspective that’s sure to move your feet. After making her Broadway debut at the age of eight, the triple-threat performer has continued singing, dancing and acting in feature films, television, theatre, animation and commercials for over 30 years, strengthening her passion for music and performance.  After moving to Los Angeles in 2011, Quinn was thrilled to meet a group of talented, like-minded musicians. She joined creative forces with co-writer, co-producer and drummer Tom Murray, guitarist Frank Giffen, saxophonist Jorge Reyes and bassist Chris Smith, and the Leapin’ Lizards was born. Now, the band is treating audiences everywhere to their grooving, foot-stomping tunes that keep them coming back for more.

Aileen Quinn and the Leapin’ Lizards have delighted concertgoers at numerous high-profile venues including the Whiskey a Go Go and Viva Cantina in Los Angeles, the Torrance Cultural Arts Center in Torrance, Calif., the Disneyland Tomorrow Land Terrace and Downtown Disney. In addition, they’ve performed at festivals like Pershing Square’s Oktoberfest in Los Angeles, Viva Las Vegas Rockabilly Weekend in Las Vegas, Nev. and the West Coast Kustoms 'Cruisin' Nationals in Santa Maria, Calif. The groups debut album, Spin Me, was released in 2015 and earned the group praise from The Daily Breeze, The New York Post, LA Weekly, CityWatch and the San Francisco Chronicle in addition to a full-length profile and Q&A in the Washington Times. Their highly-anticipated follow-up album is currently in production.

Brought to you by Barb D’Anneo