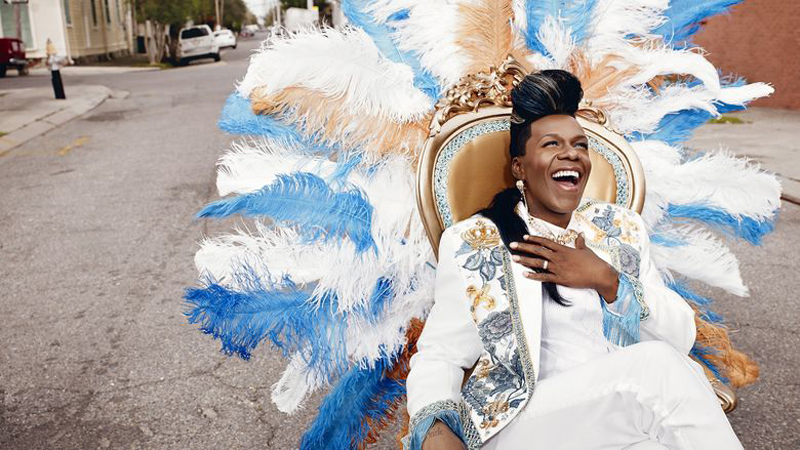 Celebrated rapper and ambassador of the high-energy, New Orleans-based bounce movement, Big Freedia—the ‘Queen of Bounce’—is a dual force of jubilance and resilience, bringing hip-hop with a vibrant twist, teeming with danceable rapid-fire beats, bold call-and-responses and a healthy dose of empowerment for concertgoers of all ages, backgrounds and genders. After getting her start singing in the choir of her childhood Baptist church, Big Freedia began her onstage performance career around 1999 as a backup dancer and singer for fellow LGBTQ ambassador of bounce music, Katey Red. Big Freedia’s dynamic performances immediately attracted an avid fan base, inspiring her to pursue a solo career. Her vibrant danceable music seamlessly glides between poignant, hard truths and jubilant call-and-responses that inspire concertgoers of all walks of life to confidently embrace their inner dancer, ‘releasing their wiggle.’ As a musician, published author and host of Fuse’s docu-series Big Freedia Bounces Back, she empowers her fans to believe in themselves, follow their dreams and stand firm in who they are. Fully aware of the power of music to build acceptance and awareness of social issues, following the devastation of hurricane Katrina in 2005, she was on the forefront of the town’s cultural recovery. As described by New Orleans-based music critic Alison Fenterstock in The New York Times, “Freedia was one of the first artists to come back after the storm and start working, and she worked really, really hard. If you lived here, it became impossible not to know who [she] was.” That work ethic has paid off and Big Freedia’s star has only continued to rise, earning her fans and critical acclaim across the globe with her signature brand of bounce music that’s guaranteed to get your body grooving.

Since releasing her debut album Queen Diva in 2003, Big Freedia has grown to be a fan favorite at festivals including Electric Forest in Michigan, Bonnaroo in Tennessee, Hangout Fest in Alabama, the New Orleans Jazz Festival and SXSW in Texas in a performance heralded by Rolling Stone as “Probably this writer’s favorite SXSW set.” The ‘Queen of Bounce’ has received write-ups in national outlets including Pitchfork, USA Today, The New Yorker, LA Times and appeared on the cover of the June 2018 edition of Paper Magazine declaring that “Big Freedia is Taking Over.” After making her network debut on ABC’s Jimmy Kimmel Live!, the rapper has appeared on NBC’s Last Call with Carson Daly, Bravo’s Watch What Happens Live with Andy Cohen and BET’s The Real in addition to her own reality show, Big Freedia Bounces Back on online Fuse TV since 2013. In 2015, Freedia collaborated with Beyoncé on the GRAMMY-nominated single, “Formation,” and in 2018 went on to work with Drake on “Nice For What,” which peaked at #1 on Billboard’s “Hot 100” chart. Big Freedia’s latest EP, 3rd Ward Bounce (2018), was released to critical acclaim, described by Pitchfork as “True to the hometown tradition of resilience, 3rd Ward Bounce marks her return to the unctuous, mechanized mother tongue of New Orleans.”

Seating is on a first come, first serve basis. For the full description of general admission lawn seating guidelines, as well as seating for guests with disabilities, please click here.

Audience members are expected to be respectful of fellow concertgoers as well as Levitt AMP Chattanooga staff and volunteers.

Please click here to review the items you can and cannot bring with you to Levitt AMP Chattanooga concerts, as well as a full list of conduct that may result in your removal from concert grounds.

A wide array of food and beverages are available at local vendors area. Underage and excessive drinking will not be tolerated.

If you plan on consuming alcohol at Levitt AMP Chattanooga, please read the venue's alcohol policy.

As part of our partnership with The City of Chattanooga, recycling bins are located throughout the lawn area. Please do your part by disposing of your trash properly and recycling all plastic and aluminum products.

Smoking is not permitted in the restrooms, lawn area, vendor areas, or while waiting in lines such as concessions, merchandise... etc. This includes tobacco and electronic cigarettes.

Tailgating is strictly prohibited. This includes, but is not limited to, drinking alcoholic beverages, grilling out, and games or any other activities that may obstruct or distract traffic. LEVITT AMP CHA MANAGEMENT TEAM appreciates your cooperation in helping us provide a safe environment for all patrons.

There is ample FREE parking within walking distance to Bessie Smith Cultural Center (directly behind the venue within the City of Chattanooga Government Parking) and including metered off-street parking deck. Motorcycles may park at their own risk in the specified parking lots or surrounding area. There is not a specific parking area for motorcycles.