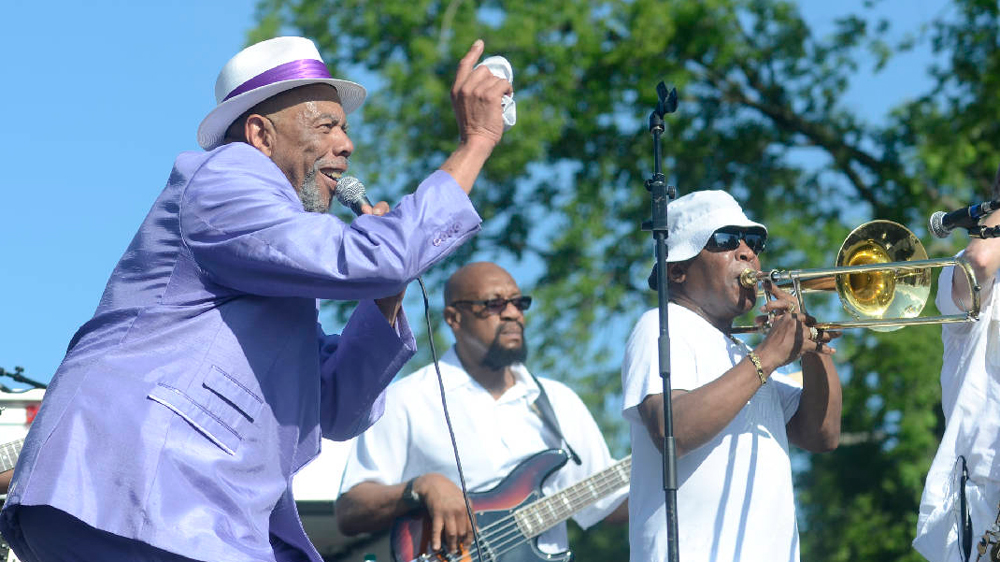 Self-described as “An organic public intellectual bluesologist,” Chattanooga, Tenn.,-native Deaconbluz and his Holysmoke Band’s lively take on traditional blues dance music will have you dancing the night away with loved ones, friends and neighbors. Together they’ve delighted audiences with their eclectic fusion of gritty blues, upbeat zydeco to old school R&B, since 1997. Growing up, Clark “Deaconbluz” White was encouraged by his family to share his love of music, making his first televised musical performance at the tender age of five when he sang “The Yellow Rose of Texas” clad in a cowboy outfit at Chattanooga’s WDEF studios. Throughout this childhood, his highly-educated parents stressed the importance of higher learning which inspired him to attend Morehouse College in Atlanta and later to earn his Ph.D. from Michigan State University, as well as pursuing post-doctoral work at Harvard University. All the while, Dr. White says he “always knew that from an early age that music, in some form or fashion, would play a vital role in [his] life.” Over time, he found blues to be a vehicle to share his love of music while exploring his African American heritage. “This is why I do the blues, because it is the soundtrack of the American experience…” he explained in an interview with The Pulse, “To teach you about the blues, I have to teach you about the history of black working class people, the life of the black slave, the black royal peasant, the black early industrial proletariat worker, and the present unemployed, marginalized group of black youth in this country. The blues is nothing but the facts of life.” Together with the Holysmoke Band, Dr. White “Deaconbluz” White takes listeners on a vivid journey across American history featuring raw guitar riffs, powerful vocals and vibrant rhythms that are guaranteed to get you dancing.

Deaconbluz and The Holysmoke Band have performed at prominent festivals and venues including The Riverbend Festival in Chattanooga, The National Black Arts Festival in Atlanta, The Philadelphia African-American Museum in Philadelphia, Blind Willies Blues Club in Atlanta and The DeKalb County Blues and Jazz Festival in Decatur, Ga. In addition to his life as a performer, Dr. White is currently the director of programming and a producer of the annual grassroots community-based Blues in the Knob festival. As a nationally known speaker, consultant, artist and blues music educator, Dr. White has taught at Michigan State University, Temple University in Pennsylvania, Northeastern University in Boston, Brown University in Rhode Island and Morehouse College (his alma mater). He has also served as a visiting scholar at the WEB DuBois Center for African American Studies at Harvard University and the Delta Cultural and Research Center at Mississippi Valley State University. In addition, Dr. White has served as a consultant for the National Jazz Service Organization, the Pew Foundation, the Delta Blues Museum, the Chattanooga African American Museum, the Afro-American Museum of Philadelphia, the High Museum of Atlanta, The Mckenzie Foundation, Community Impact of Chattanooga/Lyndhurst Foundation, Riverbend Festival, House of Hope and the Jewish Cultural Center of Chattanooga.

Seating is on a first come, first serve basis. For the full description of general admission lawn seating guidelines, as well as seating for guests with disabilities, please click here.

Audience members are expected to be respectful of fellow concertgoers as well as Levitt AMP Chattanooga staff and volunteers.

Please click here to review the items you can and cannot bring with you to Levitt AMP Chattanooga concerts, as well as a full list of conduct that may result in your removal from concert grounds.

A wide array of food and beverages are available at local vendors area. Underage and excessive drinking will not be tolerated.

If you plan on consuming alcohol at Levitt AMP Chattanooga, please read the venue's alcohol policy.

As part of our partnership with The City of Chattanooga, recycling bins are located throughout the lawn area. Please do your part by disposing of your trash properly and recycling all plastic and aluminum products.

Smoking is not permitted in the restrooms, lawn area, vendor areas, or while waiting in lines such as concessions, merchandise... etc. This includes tobacco and electronic cigarettes.

Tailgating is strictly prohibited. This includes, but is not limited to, drinking alcoholic beverages, grilling out, and games or any other activities that may obstruct or distract traffic. LEVITT AMP CHA MANAGEMENT TEAM appreciates your cooperation in helping us provide a safe environment for all patrons.

There is ample FREE parking within walking distance to Bessie Smith Cultural Center (directly behind the venue within the City of Chattanooga Government Parking) and including metered off-street parking deck. Motorcycles may park at their own risk in the specified parking lots or surrounding area. There is not a specific parking area for motorcycles.