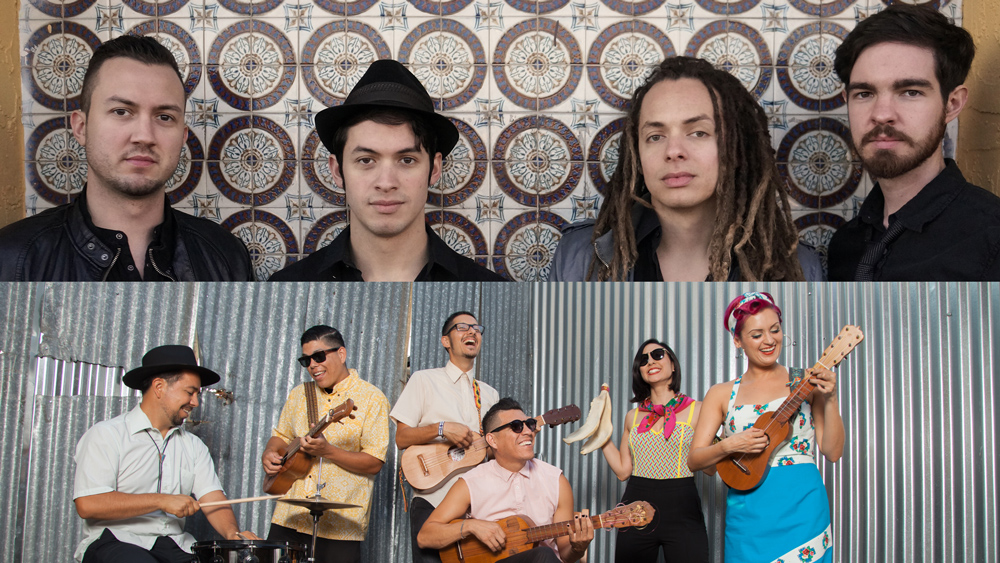 Funk-rockers Making Movies team up with Chicano folk group Las Cafeteras to redefine folk music in North America–celebrating the rich, often overlooked folk music of Latin America with a modern point of view that’s sure to get you dancing. This one-of-a-kind concert experience is part of Carnaval: The Tour, founded by Making Movies to highlight the indispensable role Latin music has played in the North American story of folk, jazz and rock ‘n’ roll. The tour rejoices in the art, history and tradition that make culture come alive.

Making Movies merge Afro-Latino rhythms with rock ‘n’ roll sensibilities and Latin American instrumentation (including Panomanian mejorana and zapateado huasteco). The Kansas City, Kan.,-based group is comprised of two sets of brothers, Enrique and Diego Chi and Juan-Carlos and Andres Chaurand. Set within dynamic sonic frameworks and marked by bold fusions of cumbia, psychedelia and Yoruba music, their songs underscore stories of characters from Venezuala, Mexico and the Midwest, all reconciling the challenges of entering adulthood. Their 2017 release I Am Another You was named by NPR as “lyrically and sonically one of the best albums of the year” and received rave reviews from such prominent print outlets as Rolling Stone and Chicago Tribune, as well as online tastemakers like Remezcla and American Songwriter. Since then, they have performed at the Kennedy Center in Washington, DC, and shared the stage with indie-sensations like Hurray for the Riff Raff, Los Lobos, Tennis, Ozomatli and Cold War Kids. Making Movies is known for their high-energy live-shows that delight concertgoers, including those at Levitt AMP Sheboygan (8/9) and Levitt AMP Trenton (8/16), with vibrant performances full of theatrics and cathartic climaxes.

Self-described “modern-day troubadours,” Las Cafeteras fuse traditional Afro-Mexican rhythms with the eclectic music stylings of modern Los Angeles, the city where the band first met while attending Son Jarocho classes at the Eastside Café Community Space. Together, they began exploring musical storytelling as a vehicle for social change. Featuring requinto and jaranas styles from Veracruz, Mexico, the group is remixing roots music, with their festive blend of Zapateado stomp dancing, hip-hop, and rock ‘n’ roll. Their bilingual (English/Spanish) songs seamlessly glide between the traditional and the modern. Las Cafeteras was featured in CNN’s Emmy Award-winning “United Shades of America,” the acclaimed Hulu original series “East Los High” and in the theme song for the internationally-lauded drama/telenovela “Bajo el Mismo Cielo.” Their success has brought them to stages across the nation—including electrifying performances at Levitt Pavilion Los Angeles in 2011 and later this summer at Levitt AMP Escondido on 11/3—and alongside icons like the Los Angeles Philharmonic Orchestra, Café Tacuba, Michael Franti, Edward Sharpe and the Magnetic Zeroes and John Legend. They’ve garnered praise from national outlets like NPR, Los Angeles Times, and BBC.