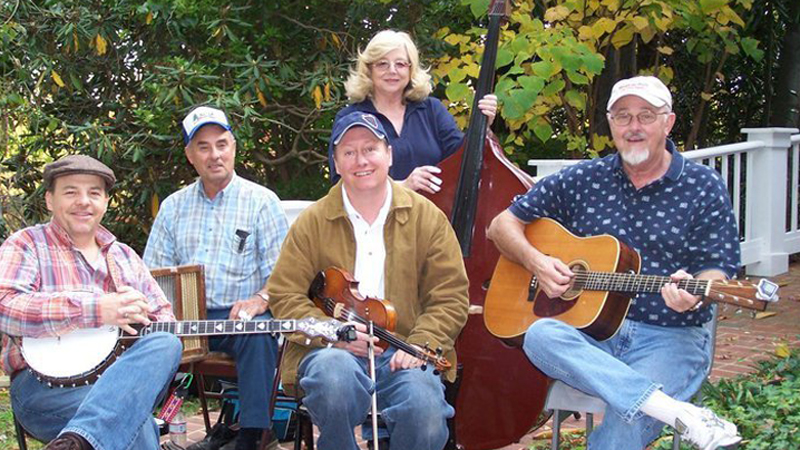 Known for their joyous bluegrass dance-music, Mountain Park Old Time Band weaves fast and furious banjo picking, lilting fiddles and Appalachian storytelling into vibrant music that is sure to get your feet moving and spirit soaring. The group has garnered a loyal following with its upbeat dance music that’s known to get audiences square dancing, flatfooting, clogging, two stepping and waltzing. The Mountain Park Old Time Band was formed in 2006 by a group of five friends with a shared love of traditional Appalachian mountain music. The quintet is made up of bandleader Nancy Gentry’s driving upright bass, Johnny Gentry’s intricate guitar and dobro skills, Roger Stamper’s soaring fiddle, C.T. Janney rhythmic washboard and award-winning dancing and Dr. Mark Handy emotive banjo and twangy vocals. Hailing from across the south with members from Mountain Park, N.C., Independence, Va., and Ennice, N.C, the Mountain Park Old Time Band’s joyous tributes to the musical heritage of their homeland is sure to get you dancing with your friends, neighbors and loved ones.

The Mountain Park Old Time Band has been featured on NPR’s “All Things Considered” and have opened for bluegrass super group Blue Highway as well as the GRAMMY-nominated Carolina Chocolate Drops and fellow Levitt veterans Steep Canyon Rangers (Levitt Shell Memphis, 2016). The band has played the Bristol Rhythm & Roots Reunion in Bristol, Va./Tenn., and Song of the Mountains at the Lincoln Theater in Marion, Va. in addition to festivals including MerleFest in Wilkesboro, N.C., and HoustonFest in Galax, Va. In addition, the Mountain Park Old Time Band also performs at the Carter Family Fold in Hiltons, Va, several times a year and each month at the Alleghany Jubilee in Sparta, N.C. The group’s latest album, Then & Now (2014) was released to glowing praise.