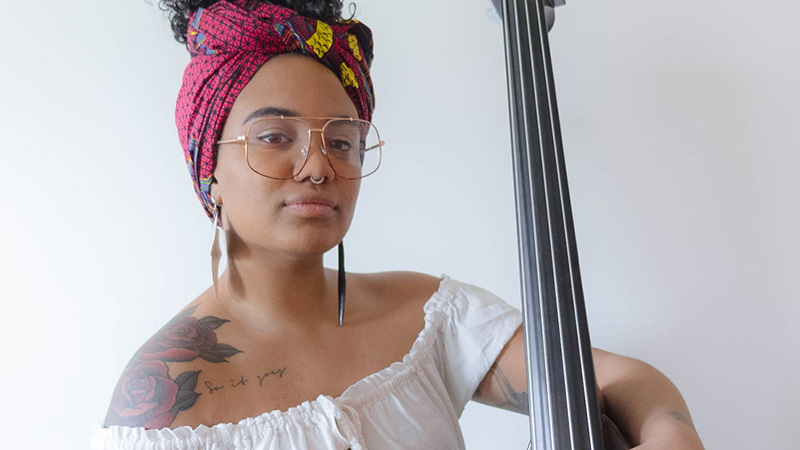 Tonina is an independent singer/songwriter, bassist, music journalist and poet from St. Louis, whose masterful take on jazz and soul fusion will dazzle. Born in San Diego and raised in St. Louis in a black and Sicilian household, Tonina comes from a family of music lovers that exposed her to a mixed sonic diet of funk, soul and jazz. Beginning her musical journey at just nine years old, Tonina trained classically in Youth and State orchestra ensembles, with GRAMMY Award-winning musicians John Clayton and Javier Limon, and studied music internationally through the Berklee College of Music. Performing bilingually in Spanish and English, Tonina’s music flows effortlessly between R&B cool, neo-classical elegance and Latin folk, making her one of the most unique musicians on the circuit.

As a woman of color who subverts common stereotypes of folk and jazz music, Tonina has strived to define her multicultural identity through her versatile musical stylings. Described by NPR as a musician who “challenges perceptions by rejecting the concept of typical genre categorization,” she has several accolades under her belt. She performed her first showcase in March, 2017 at the Ellas Crean Festival in Madrid. In 2018, she opened for GRAMMY-Award winning artist, Lalah Hathaway in St. Louis, traveled to perform at the Catania Jazz Festival in Sicily, was named one of NPR's favorite new artists of 2018 and earned a spot on NPR's list of 2018's top 10 artists. Her interpretation of "Historia de un Amor" was also placed on former president Barack Obama's top songs list of 2018.